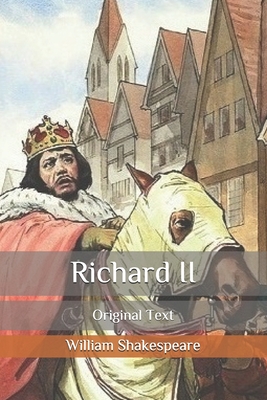 By William Shakespeare
$5.95
Email or call for price.

Richard II is one of Shakespeare's finest works: lucid, eloquent, and boldly structured. It can be seen as a tragedy, or a historical play, or a political drama, or as one part of a vast dramatic cycle which helped to generate England's national identity. Today, to some of us, Richard II may appear conservative; but, in Shakespeare's day, it could appear subversive: 'I am Richard II', declared an indignant Queen Elizabeth. Numerous recent revivals in the theatre and on screen have demonstrated the enduring power and poignancy of this drama of the downfall of an egoistic but pitiable monarch.Old John of Gaunt, time-honour'd Lancaster, Hast thou, according to thy oath and band, Brought hither Henry Hereford thy bold son, Here to make good the boisterous late appeal, Which then our leisure would not let us hear, Against the Duke of Norfolk, Thomas Mowbray?JOHN OF GAUNTI have, my liege.KING RICHARD IITell me, moreover, hast thou sounded him, If he appeal the duke on ancient malice;Or worthily, as a good subject should, On some known ground of treachery in him?JOHN OF GAUNTAs near as I could sift him on that argument, On some apparent danger seen in himAim'd at your highness, no inveterate.