The Art of Jazz: A Visual History (Hardcover) 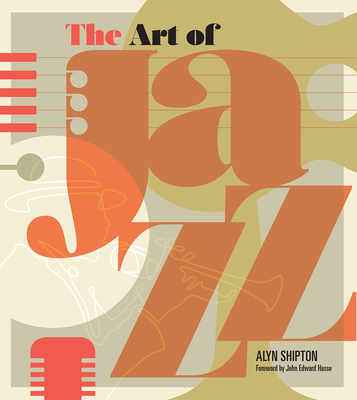 The Art of Jazz explores how the expressionism and spontaneity of jazz spilled onto its album art, posters, and promotional photography, and even inspired standalone works of fine art.

Everyone knows jazz is on the cutting edge of music, but how much do you know about its influence in the visual arts? With album covers that took inspiration from the avant-garde, jazz's primarily African American musicians and their producers sought to challenge and inspire listeners both musically and visually.

Arranged chronologically, each chapter covers a key period in jazz history, from the earliest days of the twentieth century to today's postmodern jazz. Chapters begin with substantive introductions and present the evolution of jazz imagery in all its forms, mirroring the shifting nature of the music itself. With two authoritative features per chapter and over 300 images, The Art of Jazz is a significant contribution to the literature of this intrepid art form.

Alyn Shipton is an award-winning author and broadcaster, who has written about jazz for over twenty years for the Times in London and is a presenter/producer of jazz programs for BBC Radio. As well as being on the editorial board for the original The Smithsonian Collection of Classic Jazz, and on the executive selection committee for the acclaimed revised edition, Jazz: The Smithsonian Collection, Shipton was consultant editor of the New Grove Dictionary of Jazz. He has a lifelong interest in oral history, including editing the memoirs of Danny Barker, Doc Cheatham, and George Shearing. His monumental New History of Jazz was the Jazz Journalists' Association book of the year, and won Alyn the coveted Jazz Writer of the Year title at the British Jazz Awards. In 2003 he won the Willis Conover/Marian McPartland Award for lifetime achievement in jazz broadcasting. In 2010 he was named Jazz Broadcaster of the Year in the UK Parliamentary Jazz Awards. He lives in Oxford, UK, and rural France.

Musician Shipton gathers over 300 colorful images of jazz paintings, studio photos, record covers, and posters in this vibrant illustrated history. John Edward Hasse, a curator at the Smithsonian Institution Museum of American History, writes in the introduction: “Jazz appears most directly to the ear but also engages the eye. Yet the visual dimension of jazz is often overlooked.” A detailed summary of early jazz follows—from the brass bands of New Orleans and Louis Armstrong to Duke Ellington, Bessie Smith, and Jelly Roll Morton—supported by a collection of eye-popping photos (a soft-focus head shot of Peggy Lee in 1947; Count Basie’s orchestra squeezed together onstage at New York City’s Famous Door jazz club in 1938) and artwork (such as Street Musicians, by Harlem-born abstract expressionist painter Norman Lewis). Meanwhile, noted illustrators, designers, and graphic artists such as Andy Warhol (who designed the cover of RCA’s 1955 album Count Basie), Verve Records’ David Stone Martin, and Blue Note’s Reid Miles provided album cover designs for bebop and modern jazz records. Other album cover images include those of the ever-evolving Miles Davis, Ornette Coleman, and 21st-century jazz musicians, Kamasi Washington among them. This indispensable work of the genre’s art is perfect for jazz aficionados.
—Publishers Weekly


Shipton, music historian and jazz radio host with the BBC, offers a fascinating survey of how jazz influenced the art world. As he states in his introduction, “the wider ramifications of jazz . . . as syncopated music . . . rapidly transferred itself into the visual and graphic arts.” The text follows this process by combining a survey of jazz history with a parallel look at artists who illustrated jazz sheet music, posters, and, especially, album covers, and who also incorporated jazz influences into their own paintings and drawings. Modern jazz forms, from bebop through free jazz and fusion, offered the most synchronicity for visual artists, with Picasso, Warhol, Romare Bearden, and Jean-Michel Basquiat among those whose art was used in jazz illustration or who created specific work for album covers. Shipton is also strong on jazz photography, calling out the use of iconic devices like strategically placed microphones and curling cigarette smoke. Far more than a showcase for striking album covers, this is a remarkably insightful analysis of both art and jazz, showing vividly how one form has fed the other.
—Booklist