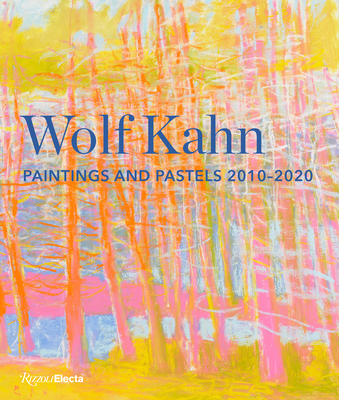 The most definitive and up-to-date book on the vibrant paintings and pastels by this popular modern master, which now serves as a memorable tribute to his artistic legacy.

A celebration of the work of the beloved American artist Wolf Kahn (1927-2020), this volume focuses on the vivid colors of his luscious landscapes made in oil and in pastel during the last decade of his life. The last study of Kahn's art to be produced during his lifetime, and prepared in close collaboration with the artist, this publication now serves as a memorable tribute to his remarkable talents and legacy.

A refugee from Nazi Germany, Wolf Kahn immigrated to the U.S. in 1940, and after settling in New York City he studied with the influential artist and teacher Hans Hofmann. Kahn's radiant hues, tangy color contrasts, and pervasive sense of light combine realism with the discipline of color field painting and place him at the forefront of American representational artists. This richly illustrated book features a generous selection of paintings and pastels that showcase his bold, freewheeling style and feature a unique blend of realism and abstraction.

During the last decade of his long and accomplished career, Kahn traded in the often-lyrical palette of his earlier landscapes for an increasingly brash and assertive chromatic vision--evidenced in electric hues ranging from acid yellow and hazard orange to saturated thalo blue. His late large-scale oils, depicting his favored subjects of barns and tree-lined fields and rivers, abound with visual energy. Art historian Sasha Nicholas puts Kahn in context with other artists and situates his late work within his broader career. William Agee, who met with Kahn for several interviews, discusses his process and most recent paintings. An illustrated chronology, with little-seen personal images, offers additional insights into the life and career of this renowned modern master.

William C. Agee is Evelyn Kranes Kossak Professor Emeritus of Art History, Hunter College, New York, and former director of the Museum of Fine Arts, Houston, and the Pasadena Art Museum. Sasha Nicholas is an independent curator and art historian specializing in American art. Most recently, she was author of Richard Diebenkorn: A Retrospective (Rizzoli, 2019). J. D. McClatchy (1945-2018) was an American poet and literary critic. He was editor of the Yale Review and president of the American Academy of Arts and Letters.

"Wolf Kahn: Paintings and Pastels, 2010-2020 (Rizzoli Electa $55) celebrates the work of the American artist Wolf Kahn (1927-2020). A refugee from Nazi Germany who immigrated to the U.S. in 1940, he settled in New York City, where he studied with painter Hans Hofmann. It’s possible to imagine this longtime New Yorker among the “humans” who crossed Brandon Stanton’s path when the photographer was exploring the streets and parks and stories of the city between 2010 and 2020." — PRINCETON ALUMNI WEEKLY

WE ARE OPEN FOR BROWSING!